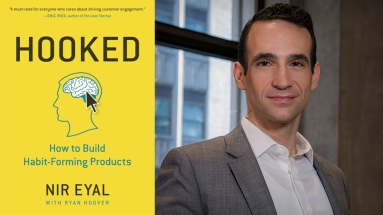 Habit-making Phases for your website/product:

Action: The action a user performs with the expectation that there will be an immediate gratification of some kind or reward.

Variable Reward: The user payoff. Variable, because with an increase in predictability, users are less prone to be attracted to the pull, or the “mystery” of an object.

Investment: Concerning the anticipation of rewards in the future.

A given behavior will occur when motivation, ability and a trigger are present at the same time and in sufficient degrees.

6 Elements of Simplicity (Determinants of levels of user engagement/user acquisition):

Time: How Long it takes to complete an action.

Money: The fiscal cost of taking an action.

Physical effort: The amount of labor involved in taking the action

Brain Cycles: The level of mental effort and focus required to take an action.

Social Deviance: How accepted the behavior is by others.

Non-Routine: “How much the action matches or disrupts existing routines” – Fogg

The appearance of scarcity affecting one’s perception of value.

Despite the irrelevant information you get, you’re led to think an object has heightened value, with less of it.

How does this influence buying/subscription behavior?

Heuristics (If you forgot what heuristics mean – related to the mental shortcuts taken to make decisions and form opinions):

2007 study of price influencing one’s perception of taste of wine:

Same wine was used, but the testers were informed that the various wines they were drinking were anywhere form $10 – $90. As the prices rose, there was a rise in testers’ perception of the taste and value of the wine, despite all the wines being identical.

People often anchor to one piece of information when making a decision (what hook do people gravitate to when they look at my landing page or my product at first glance?)

1st test group was given a punch card for coffee: There were 8 holes to punch, and the customer would have to punch 8 to receive a free drink.

2nd test group was given a punch card for coffee with 10 holes. 2 holes were punched already form the onset. Customers would have to punch 8 to receive a free drink.

Behavior being driven by 3 core motivators:

“Come to depend on the product as a reliable solution to their problem— the salve for the itch they came to scratch.”

“Our brains are adapted to seek rewards that make us feel accepted, attractive, important, and included.

People who observe someone being rewarded for a a certain behavior are more likely to alter their own beliefs and subsequent actions.

“When the kudu must stop to catch his breath, the hunter begins closing in, not to catch it, but to run it to exhaustion.”

The 5 whys – iterative interrogative process. Why is what you are making needed? Can you validate it?

“Only by understanding what truly matters to users can a company correctly match the right variable reward to their intended behavior.

When you ask for favors, testing, or execute outreach to potential subscribers, giving an element of choice largely increases targets’ willingness to engage and comply: e.g. “But you are free to accept and refuse”

Leverage familiar behaviors users want to do, instead of have to do.

Companies that successfully change behaviors present users with an implied choice between their own way of doing things and a new, more convenient way to fulfill existing needs.

When you look at your product, would you have used it? Why or why not? What current elements would stop you from using it?